Food and poetry reared their twin heads last week, with a sprinkling of pesticide in the middle.

On Tuesday, Ottawa poet David O’Meara came into town to read from Noble Gas, Penny Black as well as older and newer work, at Open Space Gallery. The reading was probably the highest he’d done; we were up near the ceiling becoming part of an installation (Bamberton: Contested Landscapes). Here, he sizes up the pulpit with Tim Lilburn.

O’Meara took the.. er.. floor, and after the reading was interviewed by poet Steven Price. 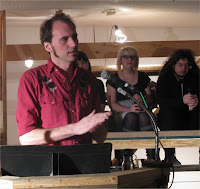 Thursday I attended a screening of A Chemical Reaction, sponsored by the Canadian Cancer Society, which is lobbying for a cosmetic pesticide ban in BC (you can send the government an email: they are seeking input on this matter till February 15). The man behind the film, Paul Tukey, is a former landscaper who through his own and his son’s experiences learned the personal and health costs of cosmetic chemicals.

He wanted to tell the exemplary story of the town of Hudson, Quebec, which imposed the first cosmetic pesticide ban in North America – due to the fearless work of local dermatologist Dr. June Irwin, who continues – at her own expense – testing skin and blood samples from all her patients, to monitor the presence of toxic chemicals in their bodies.

The film was an instructive lesson in the hard work of pushing municipal legislation through, particularly when it puts a multinational’s revenue stream at risk. Because of the town’s wish to stay chemical free, chemical companies sued it all the way up to the Supreme Court (it won!).

But those guys don’t give up without a long, expensive fight. Now Canada is being sued by Dow Chemical for violating the terms of NAFTA, which it feels, give it carte blanche to make its money unimpeded by pesky legislation or trivialities like long term health costs caused by recommended application of its products (hmm, why does that sound so familiar..?)

Dr Irwin’s advice to those who wish to follow her example and don’t know where to begin? “Letters to the editor are free” she says, and makes full use of that avenue. Her other strategy was to attend – live and in person as we all have the right and privilege to do – municipal council meetings, and speak up about her concerns, supported by her findings. Even so, with her more or less constant presence and insistence that they read her findings, it took her six years to convince them to act. The film asserts that had it not been for a receptive mayor, the bylaw would never have gone through. Despite the medical evidence.

The film also explains the systematic way the pesticide companies have exerted influence on state legislators in the US to make sure no municipality can follow Hudson’s lead. But as Tukey observed: we all have the right to vote with our wallets. Just stop buying the stuff.

To round out my week, on Sunday, Slow Food Vancouver Island held a pasta workshop and tasting at Ristorante La Piola in Victoria. About 40 of us milled about the place listening to various people talk pasta and sauce. Here’s Mauro Schelini, of The Tuscan Kitchen, advising us only to buy pasta machines that are made in Italy (the Chinese ones, he says, are too frail and have a tendency to spit metal filings into your pasta when they are new). 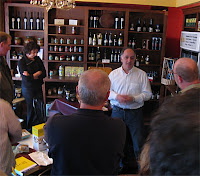 Don Genova shows us how to roll… 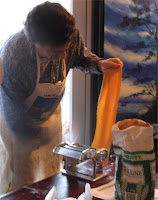 La Piola’s executive chef Cory Pelan catches and cuts the pasta as it comes out of the extruder. 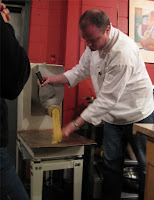 The best part of any demo… seeing the tasting plates fill. 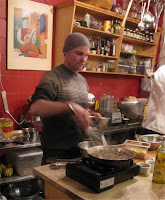 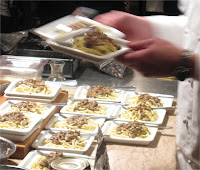 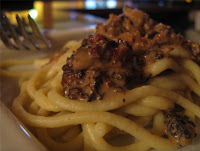