I have had a lifelong interest in what the Transition Townies nowadays call reskilling, and so I was happy to have a chance for some more information on making my own cheese. I suppose part of this is a wish for self-sufficiency, but more than that it is my belief in the value of turning my back on commercial food production wherever possible. As we’ve seen over and over again, the priorities of the food industry – creating food with the highest profit margin and the longest shelf life – are not in synch with basic human food priorities: nutrition and good taste.

Coincidentally, there was a review in the Vancouver Sun recently of two books (Just Food: Where Locavores Get It Wrong and How We Can Truly Eat Responsibly by James E. McWilliams, and Empires of Food: Feast, Famine, and the Rise and Fall of Civilizations by Evan Fraser & Andrew Rimas) looking at issues of food security from very different points of view, but reaching the same conclusions about the unsustainability of commercial agriculture. The reviewer nails McWilliams’ logical flaw neatly by pointing out that he “doesn’t properly consider that rapidly expanding food production is exactly the reason that we have so many mouths to feed in the first place” and that

If we, as a race, are committed to uncontrolled population growth, then yes, Williams is right to say that genetically engineered crops are the only way to support the nine billion people we will have to feed in a couple of decades. But the bubble will burst, because commercial agriculture devastates the soil’s natural capital, and famine will result, as it has throughout human history. 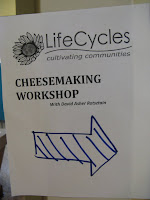 So. On to the cheese. It has been workshop central around here. In addition to last weekend’s forest gardening workshop, I was also able to catch the excellent David Asher Rotsztain on one of his teaching forays from Mayne Island. He gave an afternoon introduction to cheesemaking at the Victoria Native Friendship Centre, and showed us just what a piece of cake it is to make your own cheese.

In the three hours available, he demonstrated a quick and easy cheese (paneer) which involes only milk and vinegar. For all cheeses, he recommends raw milk if you can get it, and if you can’t, to use unhomogenized organic milk (Avalon Dairy makes this in BC) as homogenization affects both flavour and the milk’s ability to set (it breaks up the fat molecules). The resulting cheese, once drained and either crumbled or formed, can be mixed with flavourings – he used garlic scapes and smoked chilli peppers – 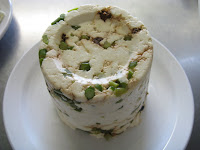 or sliced and fried (it does not melt like rennet-based cheeses). Because it’s not made with rennet, it’s suitable for lacto-vegetarians.

Rennet of course is an enzyme found in the stomachs of infant mammals and in traditional cheesemaking it comes from calves, lambs or kids depending on whether you’re making cow, sheep or goat cheese. A moral issue for consumers of dairy products, the fact is that male calves and kids are the unwanted byproducts of milk production, and if you’re harvesting the rennet at least you’re at least gaining some value from killing them, rather than the straightforward “shoot shovel and shut up” process that many dairy farmers are obliged to follow when there is no market for the male offspring (dairy animals are not usually suitable as meat animals) but infinite demand for milk.

We took a look at curd cheeses, made with rennet, and in particular cheese curds and camembert-style cheeses. Rotsztain warned against using rennet tablets from Junket, which he believed is genetically engineered (as is 90% of commercially prepared cheese in North America, in fact) and sources a natural rennet (BioRen) from a cheesemakers supply company in Ontario.

He’d started the process off an hour before we got there, so the milk had had starter culture and rennet added and was allowed to sit warming by the stove’s pilot light while coagulation carried on. We had a good demonstration of testing for a good set. One method is the clean break, in which (after you wash your hands!) you poke one finger through the surface. You should get a “popping” sensation as it breaks the surface. 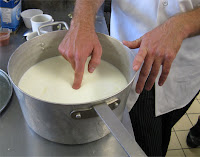 Slowly sweep your finger back up towards the surface. 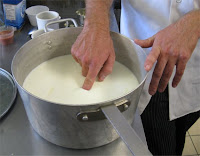 There should be resistance as the curd holds its shape 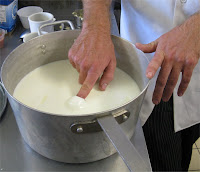 until your finger breaks through, cleanly. 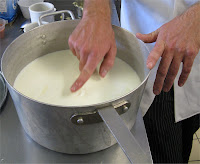 Another method is to gently press the surface of the curd to see if it will pull away cleanly from the sides of the pot.

Once satisfied you have a good set, you need to cut the curd, vertically and horizontally, and if you’re really keen and think you can get the pieces evenly sized, diagonally as well. 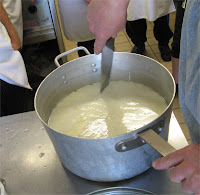 Then the curds just sit around separating from the whey. 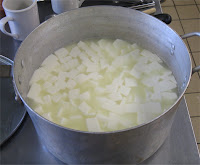 They need to be tested to see how firm they are. 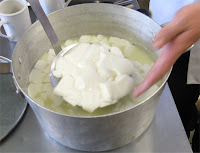 before pouring off some of the whey

and filling the moulds. Here are two ways of filling a cheese mould. The official way 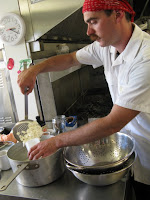 and the hands-on way. 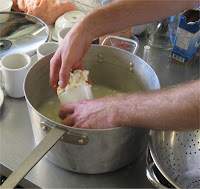 The curds drain in the mould and shrink dramatically during the process. Soft cheese are left to drain naturally, while firmer cheeses are also pressed. Commercial moulds are all plastic, although it may be possible to find stainless steel. Traditional strainers made of woven reeds, unglazed pottery or wood are verboten in plastic-loving commercial production of course. One more reason to make your own. 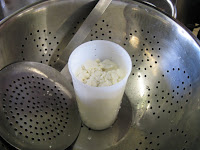 This one was taken out very early (time being of the essence) but it had already shrunken considerably. 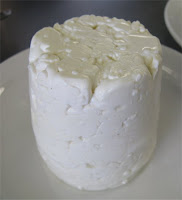 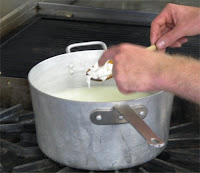 until they are firm. They are then washed 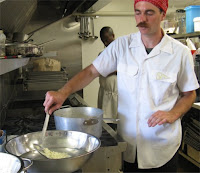 and drained and salted, ready for use. 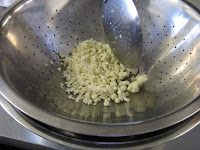 Here’s what is used to innoculate blue cheeses: 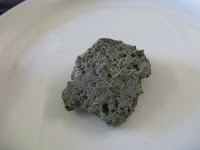 It is a piece of sourdough rye bread that has been wiped with blue cheese. You dissolve it in water and brush it on your cheese to have a blue rind cheese; or poke holes in the cheese and then innoculate if you want blue throughout. Rotsztain had a lot to say about using your fridge as a cheese cave, including the suggestion that you can innoculate cheeses in your fridge if you want to turn them blue.

The last form of cheese again required no rennet. A cheese with no name in North America, it’s the simplest and most common: known elsewhere as labneh, quark, fromage frais, queso fresco, formaggio fresco or just plain old farmers cheese, it’s basically just yogurt that is strained and hung for 24 hours. Rotsztain uses a silk scarf 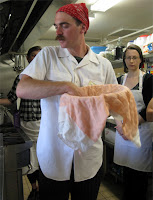 and recommends using anything except what is sold as cheesecloth in our supermarkets. You need something that has a fine weave and can be laundered.

We also discussed Kefir, which is a wild bacterial culture used to ferment milk and other products. It’s the basis for lassi and makes a fine starter for cheese products (curd cheeses require both starters and rennet); easier to maintain than yogurt starters which must be replenished periodically. You need to start with kefir grains (which have nothing to do with grain) 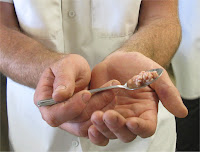 which you put into milk and 24 hours later you have a kefir drink (lassi) that can be salted or flavoured. You can also put them into juice or sweetened tea (I’m thinking this is what was behind the fermented hibiscus tea I enjoyed at the Ethical Kitchen back in April). The result is probiotic and feeds the bacteria in your gut. The grains are fed and nurtured much like a bread starter, and can be shared with friends.

And after all that… we had cheese.

One Response to Cheesy workshop