Cheese of the East

I have been back in Victoria for a bit more than a week, but it’s taken a while to get my thoughts and photos caught up. One of my last eastern treats was a trip to Prince Edward County, which I’d heard about from some Slow Foodies who’d been impressed with the gastromania going on there, and the energy of the local Slow Food convivium.

We set off a week ago Saturday morning, pausing for gas and a look round the Flint & Feather which, um, needs to be seen to be, well, seen. I do not know what relationship was imagined, if any, between this establishment and the writings of Pauline Johnson. Among the many, many diverse offerings on sale at the time of our visit were some fairly scary metal sculptures, including a life sized Alien, of the sort that makes you wonder about the settings they might end up in, particularly when offered with a five-figure price tag. For my part, I managed to escape without souvenirs other than this photo. 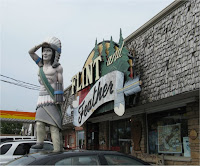 On we pressed, heading to Prince Edward County. First stop was Picton 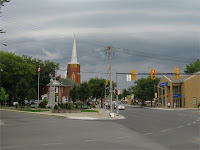 where the Methodist Episcopal church was still visible on the main street, although a peek at the other side of it revealed its state of limbo at that moment, demolition having started prematurely while some groups had still been trying to save the building. 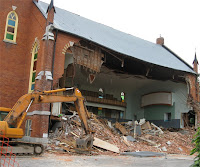 The demolition continued this week, with even more bizarre doings to provide ongoing items of interest for the local press.

Then we did a little cheese tour, starting with the non-artisanal production at Black River Cheese, which was thronged with tourists (though many, like us, may have been sheltering from a downpour that struck as we pulled in).

However, we certainly struck gold at Fifth Town,

which bills itself as Canada’s Greenest Dairy, and boasts the only aging cellar in Ontario. 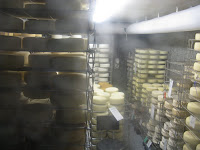 It had an excellent shop with many samples, as well as books and assorted condiments. I particularly liked the washed rind cheeses and a lot of others I didn’t buy, although we did what we could to keep the place in business.

Interestingly, they had a collection of poems on sale there by James McIntyre, aka The Chaucer of Cheese, proudly billed as Canada’s Worst Poet. But he can speak for himself (from Lines Read at a Dairymen’s Supper):

Then let the farmers justly prize
The cows for land they fertilize,
And let us all with songs and glees
Invoke success into the cheese.

Then it was goodbye Prince Edward County

which we left by ferry (which is free, because it’s considered part of the highway system, which is an argument the BC government hasn’t accepted for our west coast ferries). 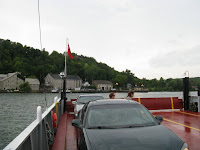 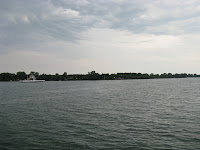 One Response to Cheese of the East