Travelling on Ryanair is … an experience. One of its peculiarities is that passengers are charged many hidden fees: for use of a credit card to make the booking, and for checking a bag, for example, and they give not so much as a cup of coffee away for free in-flight. So it’s not as cheap as you might first assume when you see 99 cent fares. But okay, so it’s the only game going direct from Parma airport to London, with your (count ’em) 15 whole kilos checked baggage allowance (which you’ve paid for the privilege of bringing). And then you get the thrill of rubbing up against your fellow passengers in the scrum at the boarding gate and you can try to out-run them on the tarmac for better seating. I won’t attempt to describe the experience of dragging (heavier than it sounds) 15 kg of suitcase without wheels (never again) through the seething inferno of holiday travellers at Stansted Airport on Christmas Eve. Brrr, may I remember enough to never do that again, and may I forget the rest.

For my return to Parma, I chose to alot a hefty corner of my 15 kg to a lovely smelly bag of cheese from the well-regarded and cunningly-named Cheeses, which has been doing a queued-out-the-door trade in Muswell Hill for some years. Not least because the shop is tiny – holds three thin customers at a time, with floor to ceiling shelves of this and that to look at while you wait. It has one modest display case which manages to hold a prime selection of farmhouse cheeses from Britain and beyond. I saw a piece of Parmigiano-Reggiano lovingly displayed and simply described (“exquisite” I think was all the sign said, or needed to say) and a bevvy of French beauties perched around it in various postures of diminishment, and beyond them a hearty selection of British cheeses.

The cheesemonger looked very weary – it was getting on to the evening of December 23 and his sign advertising baby wheels of stilton had probably lured a few dozen extra souls ithrough his doors – but he cut me some fine wedges of Cornish Yarg, Berkswell and aged Caerphilly. The women behind the counter were cheery and helpful and pointed me towards some Millers Damsel digestive biscuits to go with my selection. Luckily for my baggage allowance I managed not to come away with a slate cheeseboard or jars of chutney or tins of quince cheese to go with, nor even a fragile package of inky Charcoal Wafers, though I was sorely tempted, but they were recommended for brie, camembert or goats cheese. 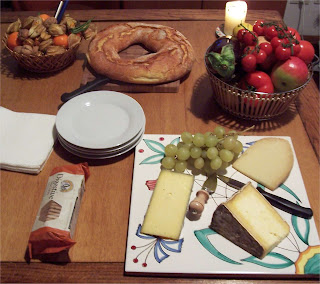 After a few days’ rest for the cheese, yesterday afternoon we gathered in my Parma kitchen to test our palates and practice our tasting terminology, yeah verily once more for England.

Yarg, I’d learned, was not an obscure Cornish word after all, it was the name of its early makers (Gray) turned around. A little disappointing to be disillusioned, but the cheese is made from a 13th century – and it seems a tried and true – recipe. Wrapped in nettle leaves, it looked very handsome, its ivory paste contrasting nicely with the dark green wrappings frosted by a pale mould. Lots of butter, rendered butter, and a bit of tangy sweetness – and perhaps a little pineapple? It had been described elsewhere as young with a fresh, faintly lemony taste; creamy under the crust, yet firm and slightly crumbly at the centre. And it was too. Many thumbs up for this one. 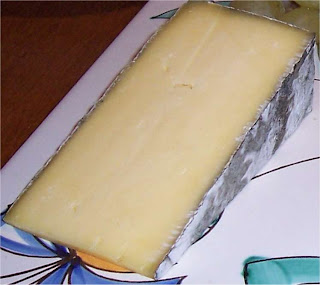 Next we examined the Berkswell, a ewe’s milk cheese made in the Midlands, and named for the village which took its name from the Saxon chief, Bercul, who was baptised in the ancient well at its centre. I read somewhere that it had been originally developed from a Caerphilly cheese recipe, although it bore little resemblance to the one we tasted after this. We admired its rind which has a tan, cobbled appearance – must be moulded in a net? We found its ivory paste smooth and firm, the tang and texture reminding us of cheddars of our pasts; a hint of animal aroma reminded us it was a sheep cheese, but the flavour was subtle and sweet. It struck us as being quite different in flavour from its Italian cousin pecorino, and people liked it for being a happy contrast to the Italian wonders all around us. 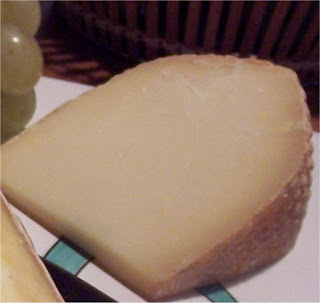 The last to fall under the knife was the aged Caerphilly; unusual, they told me at the shop, to find an aged version, as it’s usually eaten quite young. We noticed the moulds on the rind and the thick, even nail (undercrust) which when tasted was soft and silky in contrast to the dry, fine sponge of the centre. Its colour ranged from ivory in the centre to straw yellow in the nail. I’d read that it was eaten by Welsh miners to replace the salt they lost in their labours, but it wasn’t an overwhelmingly salty cheese. It had, when I unwrapped it, a whiff of ammonia but that didn’t linger after resting and cutting. It evoked aromas of yogurt most strongly, and for its texture Louisa dredged from her olfactory memory a comparison with a Greek cheese, like (but not) Halloumi. I suppose the salt content makes it a dryer cheese than most? Caerphilly is a sweet, crumbly cheese that’s nice in cooking; I remembered some Glamorgan Sausages I’d eaten at a New British restaurant once and they were a beautiful melding of salt, cheese and leek. Not nearly enough left over to cook with this time even if I wanted to… 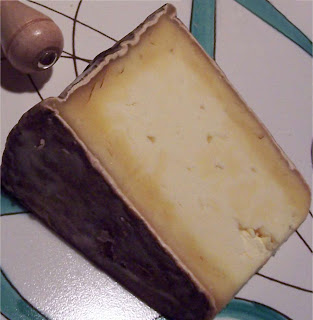 One Response to Cheese, more cheese