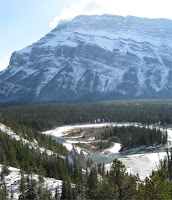 I left Banff on Monday morning, having spent much of the weekend dodging in and out of literary and visual arts events.

Saturday afternoon I slipped into and then fled screaming from the most bizarre and numbingly dull curatorial talk I’ve ever experienced. We heard scarcely a shred of information about the Laid Over to Cover: Photography and Weaving in the Salishan Landscape exhibition that we were all interested enough in to show up, and after an hour I couldn’t take it any more.

When I went to see the show on Sunday, its very point was a bit difficult to grasp (but then I had no curatorial context for it!) given the dearth of labelling – which was, according the one point I recall from the talk, a curatorial decision, though the reasoning for this eludes me, if the point of the show was to right an historical wrong of omission.

We were presented with some interesting archival photographs of the building of transportation infrastructure through BC and Alberta; and some rather lovely woven baskets dating from about 1900 through 2009. The baskets were numbered, with no contextual information, placed in apparently random order, and interspersed with modern ceremonial blankets. We ran into a textile artist who’d visited the show and who was galled and mystified as to why these blankets were there – as they were woven not from traditional materials (goat wool and cedar) nor using traditional plant dyes, nor even using traditional weaving methods (one weft she recognized from a loom in New Brunswick). Oh well.

On to literature, and another massively disappointing presentation, this time from Douglas Coupland who read in a manner that struck me as that of someone who had never before encountered the text in front of him.

In a many-signed theatre that reminded me of Italy in its enthusiasm for public instruction,

a poetry cabaret followed, of which I would say Gregory Scofield gave the best reading, but which irritated me in the way that poetry cabarets always irritate me. Luckily I was able to vent my irritation on a hapless festival survey-monger who crossed my path the next day: why, I asked, can Canadian literary festivals not treat poets as writers? Why must the only way to include them in a litfest be to herd them in nines or twelves onto a single stage at a single event instead of including them in literary panels with the prose writers? The other irritant to that event had me asking why spoken word artists must be lumped in with page poets? It would be like pairing water-colourists with metal sculptors on the grounds that they are both visual artists.

Anyway. A talk and mini-readings by fiction writers on Sunday – Debra Adelaide, Jeanette Lynes, Thomas Trofimuk and Tom Wayman – was slightly better. Although to me the supposed theme of the event, “making the most of the hand you are dealt,” was somewhat mystifying in light of the very different themes of the four books. It is a difficult and sometimes impossible task to corral every writer into thematically coherent panels; too many square pegs in the creative realm.

The winning finale to the weekend though was a visit to the Maple Leaf restaurant in Banff, where we dined happily and well on bison stroganoff. 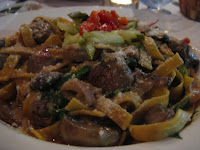 And a parting view, first thing Monday morning, of a trio of antlered elk who posed heroically at the edge of town, seeing us off. Given the damage sustained by one writer’s vehicle during this, the rutting season, we deemed it unwise to linger for photographs, so I’m afraid you’ll just have to imagine them.