I managed to get myself to Bergamo last Friday on a trip of two trains. The first, from Parma to Milan was air conditioned (just) and equipped with curtains to keep out the worst of the heat on a day when the temperature was predicted to reach 41 celsius.

By the time we got to Milan it was, well, very warm out there, and I took my cue from the locals who were huddled in the coolish shelter of the underground passageway beneath the platform, swatting Milanese mosquitoes and waiting until the last moment to rush the trains as they arrived.

When one did, alas it was not air conditioned and you could choose either to pull down the shade or enjoy the hot rush of air from the opened windows, More cruel plastic seats. Fortunately the misery only lasted half an hour or so and then we were in Bergamo, and I fell gratefully into the hospitality of Nancy and Mike who met me at the station and escorted me to my hotel.

They would have helped me to my room as well but when the front desk clerk saw us heading for the elevators, she blanched and demanded to see their passports. I explained they were not staying, but helping me with my bags. After some further officious to-ing and fro-ing she said she simply could not allow three people to occupy a single room even temporarily, it was the law. Ah, Italian rules, How endless, peculiar and insane they are!

We then hopped on a bus and ascended to the citta alta: the prettiest, oldest and highest part of town, with excellent views and lots of wandering streets. We ambled through the pretty piazza with its Venetian fountain 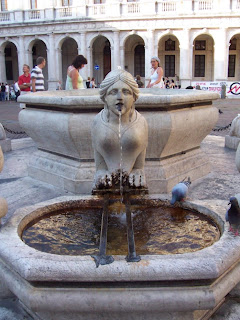 and lions watching us from atop the colonnade of the public library, where Nancy writes on warm days looking out at the hills behind the city. We peered in at a couple of food shops and admired the local specialties on offer, and then sat ourselves down for a cooling beverage on the piazza. We supped at the Agnello d’Oro, including some casonsei, the Bergamo ravioli: 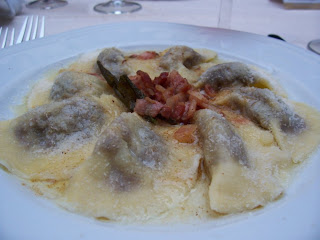 Saturday we ascended by funiculare, which was short but pleasant and had another amble through the warming streets before taking shelter in the church which houses the remarkable Tarsias by Lorenzo Lotto and Donizetti`s tomb with its weeping cherubs: 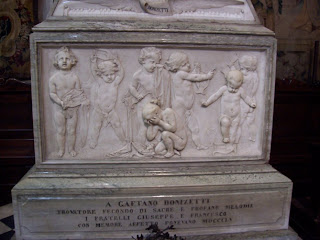 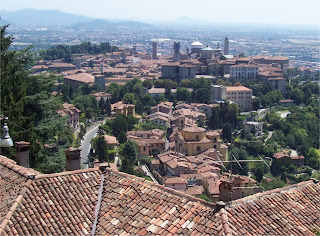 Then a second funiculare, way up to the top, where we tripped over a very fine lunch, lured in by the red water glasses and the stunning view. 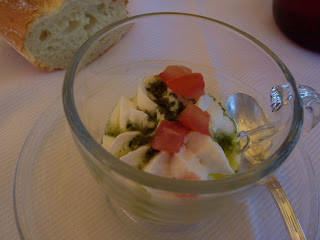 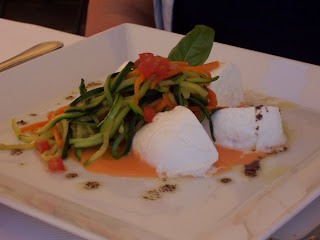 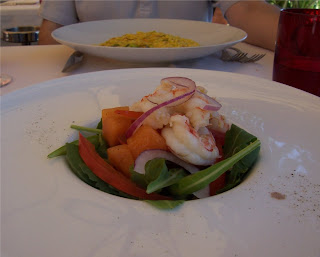 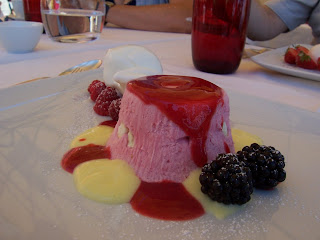 Back down the mountain we went and found ourselves at the Galleria d’Arte Moderna e Contemporanea di Bergamo where one of the featured artists was the very relevant Vanessa Beecroft, whose food diary, The Book of Food, was represented visually; she had somehow found the time to document everything she ate between 1983 and 1993. We also enjoyed a film whose name and author I forgot to write down, but which was a bit of visual poetry, white-garbed people creating fire on a disused airstrip in Essex, if memory serves.

Then back up the hill for some sups in a beautifully located but somewhat disappointing place, Antica Trattoria Colombina, recently given a thumbs-up by the Guardian which maybe spoiled it. Or maybe the chef was on hols. Or who knows. Anyway we enjoyed being out under the arbour of grapes and long beans… 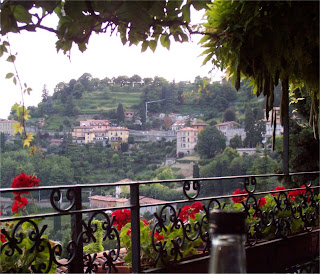 Then it was Sunday and we managed a tour of Accademia Carrara, after which we were overcome by art, heat, sloth and hunger, and retired to casa Nancy e Mike where we lunched, napped, supped and slept. Before supper we had a reviving stroll in the cooling air and looked back at the citta alta in the sunset. The next morning I woke at 5.30 and began my journey back to Parma, which took till nearly 11 because of train problems. The problem, according the man sitting next to me and frowning into a fat book of train timetables, was that all the trains were late: the hot temperatures had deformed the rails. (Did it have anything to do with Sunday’s train strike? We will never know.) 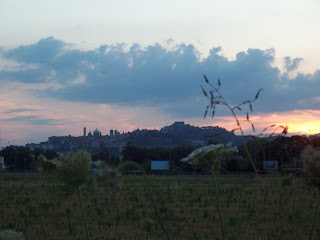