ASLE in a nutshell

Some of the ASLE conference sessions I attended this week included one about edible campus projects at Lafayette College (Corn on the Quad); the University of Central Arkansas – Allison Wallace‘s work with the Dee Brown Memorial Garden; and the College of DuPage‘s community garden.

In a session about sustainable agriculture, the topics included Ruth Ozeki‘s novel All Over Creation, about potato farming and commodity monoculture; Theatre Passe Mureille‘s legendary play The Farm Show; and Doris Lessing‘s The Grass is Singing.

Then there was a session called Earth’s Body: An Ecopoetry Anthology, which featured some great readings by Anne Fisher-Wirth, Laura Gray-Strelt, Patrick Lawler, Harriet Tarlo and (to me) most excellently the Amazonian fable-poems of Juan Carlos Galeana.

Then there was a many-fingered session on the poetics and politics of water, with papers by Doug Thorpe and Mark Feldman, and an amazing presentation by artist Basia Irland, talking about her unusual book projects (also documented in The Water Library).

After that I went to an enlightening roundtable on the value of darkness. Paul Bogard, who’d edited an anthology (Let There Be Night) on the subject, introduced the many issues of darkness, and hosted readings by contributors Gretchen Legler, Christina Robertson, Thomas Becknell and John Tallmadge. Proceeds from the book’s sales are going to FLAP and Dark Sky.

Yesterday’s events included Narratives of Invasive Species, featuring Victoria Haynes from UVic, talking about the positioning of official communication about the mountain pine beetle (and the absence of blame on humans for the subsequent loss of pine forests); Kelsi Nagy spoke about the ethics of introduction and eradication attempts of island invasive species such as the brown tree snake in Guam and coqui frogs & wild boars in Hawaii; and Elizabeth Giddens talked about the loss of Georgia’s hemlocks to hemlock woolly adelgid, and the effect of community literacy projects on monitoring and treating the infestation.

There were several plenary sessions with interesting speakers; I made it to four of these, of which the best was Karsten Heuer, who got a standing ovation after his great talk about his journeys – following bear paths, joining migrating caribou and hiking, paddling and sailing the trail of Farley Mowat’s books. 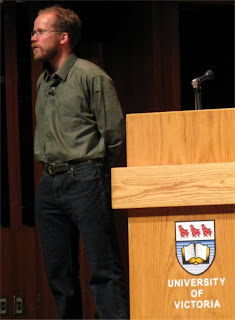 At a Saturday afternoon plenary called New Publishing Environments: The Changing Landscape of Reading, Andrew Revkin gave a talk about his career as an environmental blogger, on Dot Earth (since his visit, he’s done a special blog on UVic’s bunnies). Chip Blake talked about Orion‘s place in the digital evolution – mentioned that they add sound files for all the poems they publish (after all the electronic rights talk at the Writers Union meeting last month I wondered what the payment deal is for that). And we heard from Daniel Slager, of Milkweed Editions, who described himself as being both intrigued and perplexed by the possibilities of web publishing; mused about the future of literary publishing, of literary works whose nature is to go beyond the simple conveyance of information that the web does well.

The closing address was by Ruth Ozeki who led us through a curious relaxation exercise, which made up in some respects for the yoga class I missed on Friday. 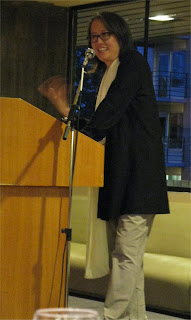 I helped a couple of attendees find some good local food at Camille‘s and tucked into an artichoke and asparagus gratin myself. 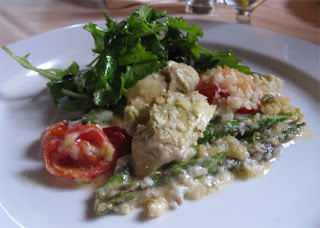 Where are the UVic spelling police? 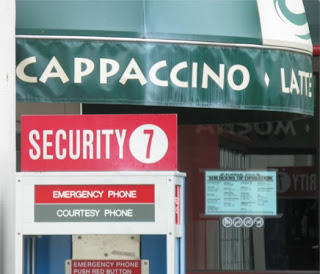 The cutest bunny on campus. 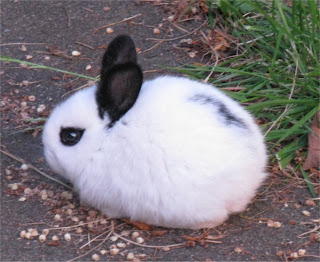