Have been whistlin‘ through Alberta, helped along with the westerly wind that is blowing all the nice warm air over the mountains and into the prairies.

Thursday’s food day at Augustana was great: it began with one of my favourite speakers, Nettie Wiebe, who gave a splendid overview of the subject of food sovereignty, using to good advantage her multiple aspects as philosopher/ethicist, feminist, farmer, political candidate and ex-farmers’ union head. Starting with the theme of dis-integration, she gave a good overview of the unhealthy influence exerted by corporations, the loss of farmers’ cooperatives, failures in policy that removed the humanity from farming, the removal of accountability from wasteful and destructive means of food production, and much more.

And I was also very taken by the producers’ panel, presided over by the dean, Roger Epp 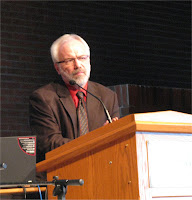 Representing grain and beef were Harold Warkentin and Wyatt Swanson 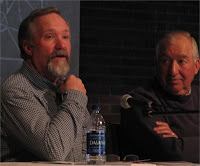 and dairy by Jan Slomp 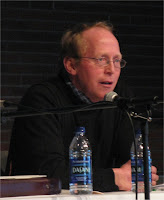 They gave their sobering views on the state of business for Alberta farmers today; they were all grim on the scale of today’s farming, which puts huge swaths of land in the hands of too few farmers. Swanson talked about the upheavals in the beef industry which have been radical over the past thirty years: from an epic high of production and sales in the seventies and eighties, to the advent of feed lots in the eighties and nineties and the transition to a beef export business to the US, the collapse of Alberta beef processing, to the death blows dealt by the first BSE case in 2003 and the credit crisis last year. His family is entering the fifth generation of farming and he’s not sure how long it will be able to continue on the land.

Slomp gave a more optimistic talk, about his evolution from conventional high-yield dairy producer to enlightened producer. He spoke of the damage the green revolution had done to the Netherlands, causing insane fertilizer use and insupportable requirements for feed and medication where once farms were self-sufficient and self-sustaining. He feels his milk yields are impressive despite his decision to top using agrichemicals on his fields and cattle; he’s worked wonders on the water system on his land by pasture management; and he’s thwarted veterinary wisdom by refusing to use prophylactic antibiotics (normally used to prevent the mastitis that is chronic among overtaxed dairy herds). The result he says, is that he lives on a pristine piece of land with healthy animals and a profitable business.

Warkentin spoke about the complexities of seed breeding and the joys of developing new varieties to meet the challenges of growing. He produces high quality seed for other seed breeders (he gave a helpful explanation of seed qualities, which are diffferent according to whether you are developing seed or sowing it for crops) and has enjoyed experimenting with different varieties along the way. He took a firm stand on the question of GM crops; said he’d tested some Roundup-ready canola once, and decided to stay away from it after that. The risk to human health, he says, is too unknown, and he could breed seed with better yields through traditional methods. He gave an interesting bit of information about Alberta’s rat-free status. I’d heard long ago about the rat patrol that kept the numbers down along the border; what I hadn’t realised is that government policy on weasel trapping had also played a part: weasels take care of the rest of the rat population.

One Response to Alberta trails