This Saturday afternoon, April 18th, at 1.30pm, there’ll be a Farms, Farmers & Food Security rally at the BC legislature, a proper foodie kick-off to the May 12 provincial election. There are many related issues we’d like our politicians to be better informed about, including the

The Forest Land Reserve, the taller cousin of the Agricultural Land Reserve, is open to similar abuses by money-grabbing developers, and has been in the news lately. The Capital Regional District attempted to undo the damage done by the provincial government, which released the lands from the FLR in 2007, and protect the area from development, but the BC supreme court said no, and the appeal won’t be heard until June. 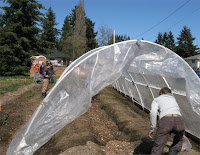 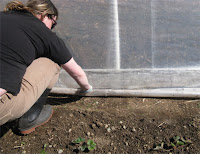 and then attending a talk by Ed Ishiguro

about food-borne illnesses (and common pathogens salmonella, listeria, campylobacter and e.coli). Ishiguro has spent many years exploring e. coli 0157:H7 and had interesting things to say about the dramatic – unprecedented – rise in food-borne pathogens over the past forty years or so, coinciding rather dramatically with the rise of industrial food production, whose profit-driven livestock overcrowding methods have not just allowed but actually facilitated the spread of pathogens. He is also adamant that the low-dose feeding of antibiotics to all our industrial food animals (too low to prevent disease, as he says farmers are led to believe, but rather used to make them grow faster) has caused the antibiotic-resistant diseases that are infecting our hospitals. A no-brainer you might think, and yet governments in North America have been lead-footed in their response; he cited encouraging (though he felt not yet convincing) research results from Denmark where a ban on antibiotic growth promoters have actually caused antibiotic-resistant diseases to decline, and more treatable ones to emerge.

Some good background as I prepare for tomorrow’s Foodsafe class…

One Response to Agriculture rally, the FLR, hoop houses and food-borne pathogens