A Saturday at the Aldeburgh Food Festival

A busy place, the Aldeburgh Food Festival. Only in its third year and utterly mobbed as the organisers sought to top the 15,000 visitors they had last year. I am blessed by friends who had sussed this little corner of foodie heaven out and took me along to see this year’s offerings. 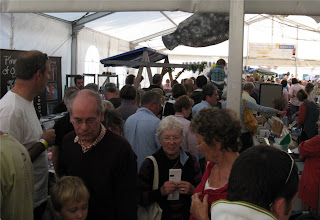 There were some honey-sellers there and we stopped for a short chat. They asked me if the African Bee had been seen in my neighbourhood (nope, not so far, so far as I’ve heard) and told me they’d successfully experimented with the icing sugar method of varroa mite control. They also said that borage had been a great source of nectar up until this year, when the Suffolk growers lost the oil contract to China. So no borage planted, no flowers for the bees, and a great deal less honey. Another blow for monoculture… 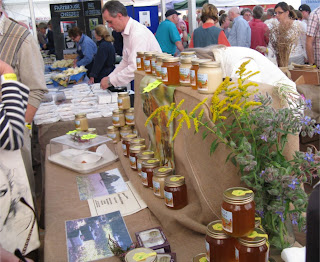 We paid a happy visit to Emmett’s meaty stall, where the seller presided over acres of what I hear is gorgeous black (from the treacle cure) bacon, and was dishing out irresistible samples of imported chorizo. We weakened and he handed one over, apologising for having run out of bags, and suggested we walk around with it hanging from the string. I asked about storage – having had a stern lecture from a French sausage seller earlier in the month about the evils of refrigerating dry-cured sausage like this, and our man agrees there is nothing worse for the flavour and texture of the sausage. The best storage for chorizo is (pats stomach); otherwise, hang it from its string in a cool, dry place (my kingdom for a larder). If it gets mouldy, cut the mould off. Consume at a swift but leisurely pace as it will gradually dry out which impairs the flavour somewhat. And makes it hard to slice. 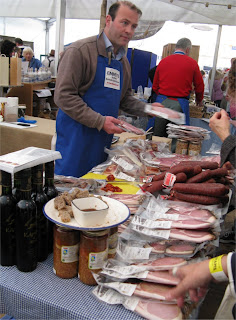 Another old friend: Suffolk Gold cheese (with Suffolk Blue in the background). 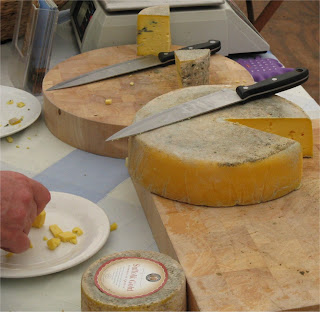 On to the celebrity chefs. We caught the end of Tom Aitken 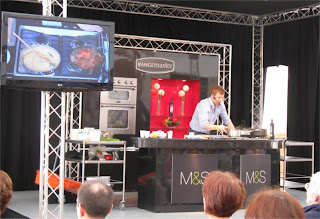 and were sooner into the scrum for a taste of the lobster risotto than this group were. We also got in there while there were still spoons. Hah. 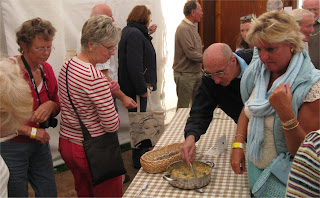 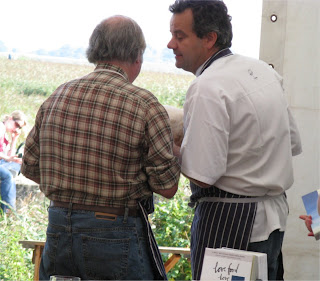 and he explained how you really have to know people to get hold of these monsters as they’re hard to find in the shops (though our local wundershop sometimes has them around this time of year). 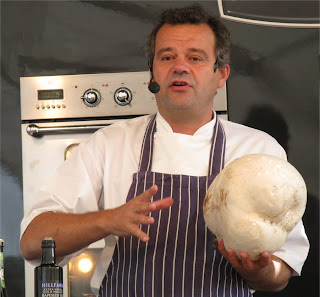 Then he sliced a slab off and fried it up to sit under some game he was preparing, with creamed corn, under the watchful gaze and microphones of Tom Parker-Bowles and Matthew Fort. 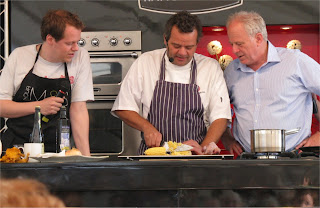 We had a grisly presentation from Fergus Henderson, working on the pig tail end of his nose-to-tail weekend (he gave a workshop on cooking a pig’s head on the Sunday, which we missed, alas). We were not convinced after sampling the finished product – braised, cooled, coated and pan fried – which just tasted a bit like, well, pan fried fat. But now we can move on and eat something else. 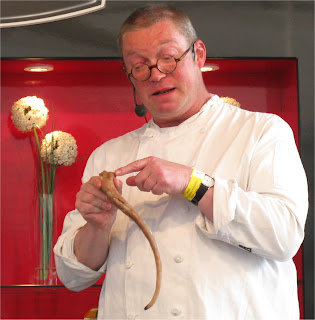 We didn’t choose crepes, although we were able to queue for something else in sight of the beautiful van. 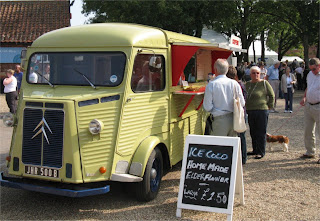 And we dined al fresco. With everyone else. A beautiful day for it… 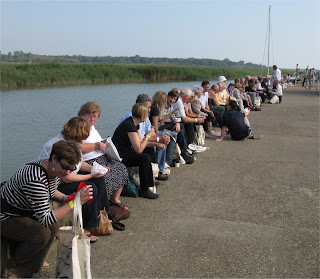 …and for a walk out to see the Creek Men afterwards. 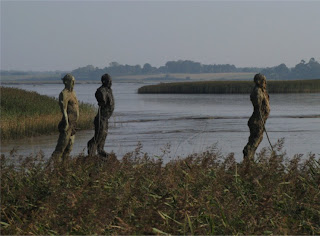 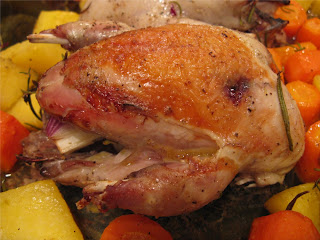