A day of quince

It all started innocently enough, with a basket of quince, foraged from my dogsitter (in exchange for a share of the products) and a relatively free day. My ambitions were to make quince paste and quince jelly. 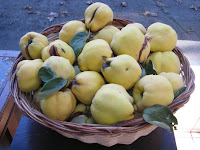 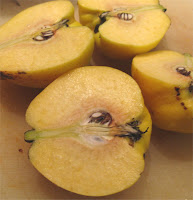 I peeled and trimmed the quince until I had 4 pounds of peels and trimmings, and 3 pounds of quince chunks. I put them in separate pots and started cooking. 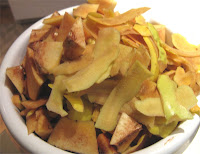 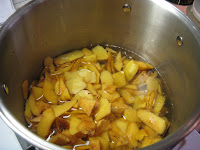 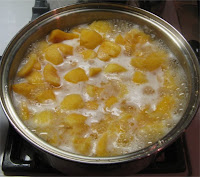 After a short while, the discolouration disappears and the kitchen becomes fragrant with the incomparable scent of cooking quince. It’s a perfume you don’t forget. 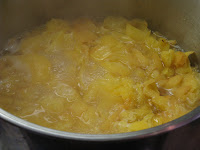 When the quince chunks cooks down and become soft, in about 40 minutes, pass them through a sieve, add sugar, and cook – stirring all the while – for another hour or so until they deepenin colour and become thick. After a point, it gets so thick it starts spitting molten fruit/sugar, which adds a certain frisson to the enterprise. Add the juice of a lemon and spread on oiled parchment paper (actually a teflex sheet in this case) to dry for a couple of days. Once it’s firm enough you can turn it to get air on the other side. 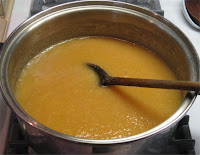 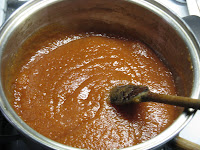 Cube it and roll the cubes in sugar. You can store them for months and months in airtight containers in the fridge. 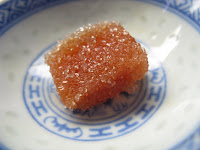 Meanwhile, the peels and trimmings are cooking and colouring as well. After a couple of hours, they’re darker and ready to strain – never pressing them lest you cloud the liquid – in jelly bags for around 4 hours.

Once the liquid has stopped dripping, return it to the pot with some lemon juice. The sugar, according to my recipe, is measured out (1 pound sugar per imperial pint) and warmed in the oven before adding to the liquid. You then boil it merrily, skimming the foam, until it’s dark and fragrant, and you get a good set. Then jar it up and process as you will. 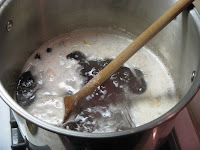 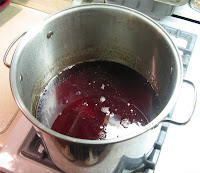 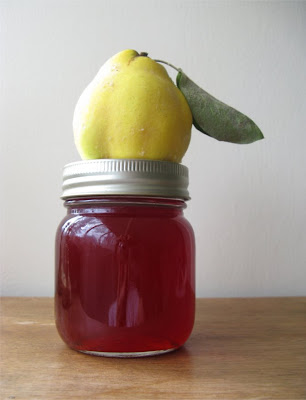 2 Responses to A day of quince