On the last day of August I wandered along to a potluck information session on the Linen Project that Denise – who’s been driving the project forward under Victoria Transition‘s Reskilling umbrella – hosted. Although the sun was setting and the day’s participants had scattered, there was a full scale exhibition set up in the garden, and a spinner demonstrating how to spin linen from flax fibre that had been retted, broken, scutched and hackled by willing volunteers. A perfect plant, flax, offering flowers, food and fibre. Meanwhile, the fruit continues its burst of plenty in these summery September days. I joined three other Fruit Tree Project volunteers this morning to pick a tree that yielded a spectacular 260kg of apples before we had to leave with promises to return. After weeks of picking, juicing, freezing, baking and sharing my own apples, I finished stripping my yellow transparent tree on the weekend, which also had a record yield, and squeezed around 30kg into the Fruit Tree Project’s cooler, which is busting at the seams while its coordinators work to distribute the bounty between charities and local processors.

Things continue to flourish at Haliburton Farm too where our veg boxes this week included a first crop of apples from the farm’s replanted orchard, some herb bundles pretty enough to grace a table, and some rather beautiful sweet peppers. 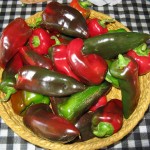