There has been a fair amount of GMO action, good and bad, this month.

On October 10, the Healthy Saanich Advisory Committee bravely invited public input into their deliberations on the question of whether to allow Genetically-Modified (GM) seed crops into the municipal district. [For those who don’t live here, Saanich is one of the largest of our 13 municipal districts and 3 electoral areas that make up what is commonly known as Victoria (plus the Gulf Islands), but more accurately named the Capital Regional District. It is also a daunting mixture of urban, suburban and rural (peri-urban really, on this increasingly crowded tip of Vancouver Island) areas.] The Healthy Saanich Committee took the public input into their own deliberations, and will be making a recommendation against allowing GM crops to Saanich Council in November. One of the presenters requested that the meeting where the recommendation would be made should be one where the public could be present.

At least fifteen residents made written presentations to the committee, and another fourteen each made five-minute verbal presentations to the committee, who will have left the meeting groaning under the weight of much additional reading. Local farmers, gardeners, citizens, doctors, scientists and church groups were represented, and thirteen of the fourteen presenters spoke emphatically against allowing GMOs into the community.

In my five minutes I spoke as one of the millions of people in North America who have, for the past 18 years, been obliged to consume GM foods without our knowledge or consent, because our federal government has twice blocked the introduction of mandatory GM food labelling, thereby removing our choice over whether or not to eat it. And GM ingredients are present in, so the estimates go, some 70% of the foods in Canadian grocery stores (if you eat a lot of processed foods, your consumption is probably higher than that). Other presenters pointed out the failure of governments to require adequate long-term studies of GM products on animal and human health and on the environment. Still others argued that GM crops would increase the amount of pesticides used on our soil, and therefore the quantity of pesticides introduced into our diets and water supply.

In a timely reminder that the pesticide threat was no idle supposition, we’ve just had news that Canada is on the brink of approving GM corn and soybeans – destined for human and livestock consumption – designed for use with the pesticide 2,4-D (an ingredient in Agent Orange), which is needed because Roundup-Ready GM crops have created glyphosate-resistant weeds, creating what had been predicted from the outset: an increase in pesticide use, not the decrease originally promised by the biotech industry.

In Ontario, farmers gathered to protest the planned introduction of GM alfalfa into Canadian fields. The prospect is more than worrying, because alfalfa is a hugely important crop, which forms the bottom of our own food chain. Organic growers are heavily dependent on it both as a livestock feed, an export crop and a cover crop. Since the only alternative Canadians have if they don’t want to eat unlabelled GM foods is to buy certified organic (no GM ingredients or agricultural inputs are allowed in Canada’s certified organic production), this puts our whole organic food system at risk. Given the rates of contamination of non-GM corn, soy and canola by their GM counterparts in North America, and the sorry tale of the “Triffid” flax that killed Canada’s European flax export trade, it is a certainty that GM alfalfa will cross with no 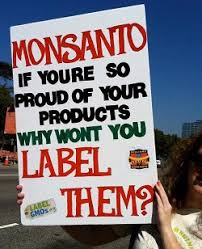 And finally, Michael Pollan has written a thoughtful analysis of California’s pending vote on mandatory labelling of food containing GMOs, coming up November 6, and the need in today’s damaged food system, for a more vigorous and less one-sided blending of food with politics.

This entry was posted in food labelling, GMOs, pesticides, water. Bookmark the permalink.

One Response to Genetically-modified October