The Intervale: vegetables in Vermont

Just outside Burlington, Vermont lies 350 acres of fertile flood plain along the Winooski River, which has been preserved for sustainable farming since 1986 when the owner of a local garden supply company decided to turn a polluted, dangerous wasteland back into an agricultural area capable of feeding its community. The Intervale Center is a collection of organic farms, trails, wildlife corridors and projects administered by a nonprofit society. In 2007 the farmers of the Intervale grew an inspiring total of one million pounds of food on this land. Its farsighted compost project has been going since 1987 and now turns 30,000 pounds of kitchen and yard waste into commercial compost products for home gardeners.

We visited Diggers Mirth, a farming collective of 5 farmers working 15 acres. It’s been going for 18 years and has a solid base of buyers from local restaurants and also sells at Burlington’s biweekly farmers markets. Farmer Hilary Martin 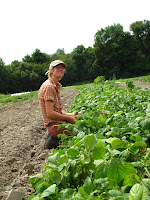 showed us around; here she’s in the pepper patch where landscape fabric keeps the weeds down and the heat and moisture in the soil. 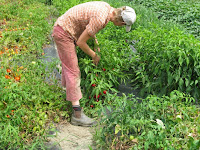 Known for its mesclun mix, and its carrots,

the farm also produces a variety of crops like okra, watermelon and soybeans, 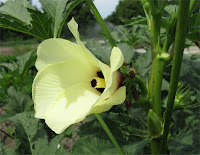 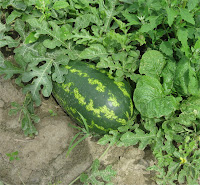 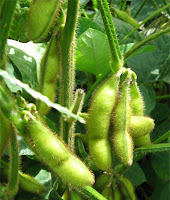 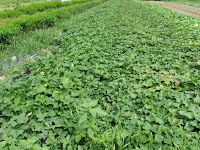 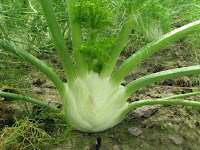 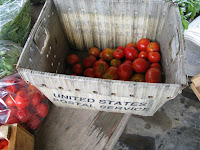 Pests include flea beetles, which can make lacework out of cabbage leaves 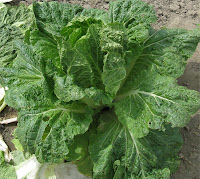 and deer. On Vancouver Island the answer to these is 8 foot deer fencing; here it is 3 foot high solar-powered electric fencing.

The whole of the Intervale uses only organic growing methods, and the ecosystem seems to be thriving as a result. 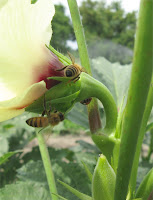 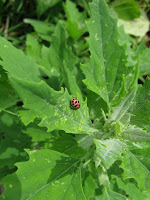 Like all organic farmers, the Diggers Mirth folk are resourceful with their equipment. I liked the washing station which uses repurposed washing machine innards. 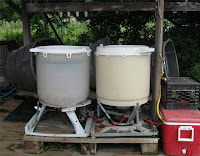 The Diggers Mirth delivery truck has lately taken to doubling as a veggie wagon, circulating through urban neighbourhoods like an ice cream van, blasting disco tunes and handing out free watermelon. 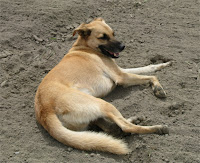 0 Responses to The Intervale: vegetables in Vermont